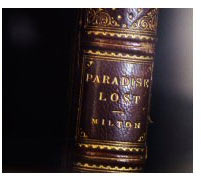 New Chapter in the history of Milton’s Cottage

From after-hours events to exhibitions, workshops and family trails, there’s a lot going on at Milton’s Cottage this spring.

The Grade I listed writer’s house museum – where John Milton wrote his epic masterpiece Paradise Lost – re-opens to the public on Friday 25 March, with an opportunity to meet the new Business Director, Kelly O’Reilly. She joins Milton’s Cottage after eight years as Co-Director of Sing London, the public arts organisation that brought pianos, ping pong and Talking Statues to the streets of London.

Kelly says: ‘I am thankful to the Trustees for this opportunity to lead the museum into the next chapter of its history. Milton’s Cottage is a must-see destination for literature lovers everywhere – a chance to see where one of the world’s greatest epic poems was composed. I hope to provide a wider range of literary, cultural and educational events than ever before to help keep Milton’s legacy alive.’

Simon Avery, Chair of the Board of Trustees, says: ‘Kelly’s compelling vision, energy and residency at Milton’s Cottage is breathing new life into our unique museum. It now has even greater attraction for visitors, whether they already know the Cottage and its beautiful Registered Garden, or are yet to discover the importance and continuing relevance of John Milton. His poetic genius and his views on freedom of the press, divorce, education, religion and parliamentary democracy still resonate today.’

Highlights of the spring programme include Beyond Words, the first contemporary art exhibition in the museum’s 129 year history. Launching as part of National Museums Week, the exhibition features 6 artists who have created new work in response to the Milton’s Cottage collection – the world’s most extensive public display of first editions of John Milton’s work, both poetry and prose.

Families are invited to explore the museum’s beautiful garden – the only Grade II registered garden in the Chilterns – with an Easter Egg Hunt on Easter Sunday.

There will also be a drop-in family art workshop during May half-term, free with entry to the museum.